One inherent challenge of having an Internet presence for a business is the possibility of someone posting rumors, lies or deliberate propaganda about you.  So, what is the difference?

Rumors and lies are typically organic and viral. Typically, there’s no organized campaign with funding and muscle. Instead, it’s usually fueled by water-cooler gossip, e-mail chains and other person-to-person contact that begins to grow and gets bigger, sometimes taking on a life of its own.  Sometimes these are deliberate lies posted by former or disgruntled employees, for example.

There are numerous ways to deal with such information as long as you act quickly, be pro-active instead of burying your head in the sand,  and tell the truth. The best defense, however is often a good offense.  Having a good website, in advance, puts your company at the top of the Google or Yahoo search (among others) and keeps the bad information further down in the search list.

With additional work, this incorrect news can be moved even further down the search list as you are meanwhile addressing the lies or rumors forthrightly and openly.

A good website also gives you a ready  forum for discrediting the rumor or lie. Some companies have “Dark Pages” — a page already designed  ready to go to respond to a falsehood by inserting the relevent information and 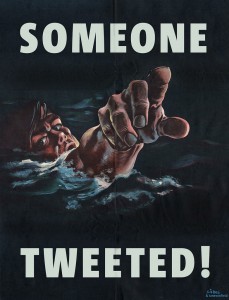 then quickly turning the page on to “go live.”

The best known examples of propaganda come from government efforts during wars, with the most famous being posters during World War I and World War II. A big problem in war is making the population — especially civilians drafted into soldiers — see the enemy as something less than human.

Propaganda works by tapping into emotions through images, slogans and a selective use of the facts.

Corporations, competitors, activist groups or individuals, and political campaigns will sometimes be tempted into using these techniques.  The effect of such propaganda campaigns against you can be devastating to your business, or even fatal, if you don’t act fast.  So you need to know how to counter them.

That’s where we come in.