Stacy Snyder wanted to become a teacher.  The single mother had completed her coursework and was looking forward to her new career.  Then her dream died.  University officials told her that although she had earned all the credits, passed all exams, and completed her training that she would be denied a teaching certificate because of behaviour unbecoming of a teacher.  What 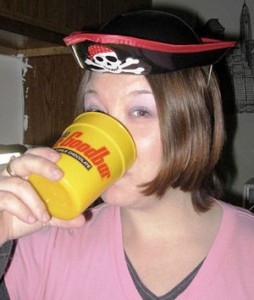 behaviour she asked?  An on-line photo on MySpace showed her in costume wearing a pirate’s hat and drinking from a plastic cup, which she had captioned “drunken pirate.”

The university argued that the photo was unprofessional since it might expose students to a photo of a teacher drinking.  Even if she took the photo off MySpace, the damage was done as her page had been cataloged by search engines and her photo archived by web crawlers.  (Just image search Stacy Snyder) .

She unsuccessfully sued the University.   But the bottom line is that the Internet remembered what Stacy wanted to have forgoten.

This particular story has been told thousands of times and is also the intro to the facinating book  “Delete.  The Virtue of Forgetting in the Digital Age”  by Viktor Mayer-Schonberger (available from Amazon and from most booksellers).  It’s an interesting treaatise on the challeges of an Internet that never forgets, as well as a proposal to add a “forgetting” element to the Internet.